It is with a warm greeting, we say, “Howdy!” from Scotland! The month of April was very full of “goodbyes” and closing doors, and it was more emotionally difficult than we expected. It’s excitement, mixed with loss. It was grieving the leaving, and also preparing for the new and exciting things to come.

During our final month, we hosted a couple events: one in NW Houston and the other near Galveston so folks could have the opportunity to stop by and visit with us if they wanted. We raised over $3000 through the silent auction event in April toward our relocation costs. In total, before we left, we were able to raise a total of around $16k of the $25K needed to cover the vehicle and the costs of setting up to serve here.

We apologize if we haven’t been as connected in the past three weeks as we have gotten settled. We have tried to respond and answer any messages received during this time. The first week was pretty hard physically, mentally, and emotionally. It was a hard bit of travel and the change and shifting was hard on the kids. There was a lack of sleep, adjusting to the amount of summer daylight currently here, plus time change all on top of the general emotions accompanying such a big shift in life. The kids’ emotions were very high the whole first week of May as they worked through it all.

Now that we are pressing into week three here and then onto week four, things are slowly settling. We’ve already met a lot of people and made “first impressions”. We have also started the relation building process with people like our neighbors and local business owners as well. 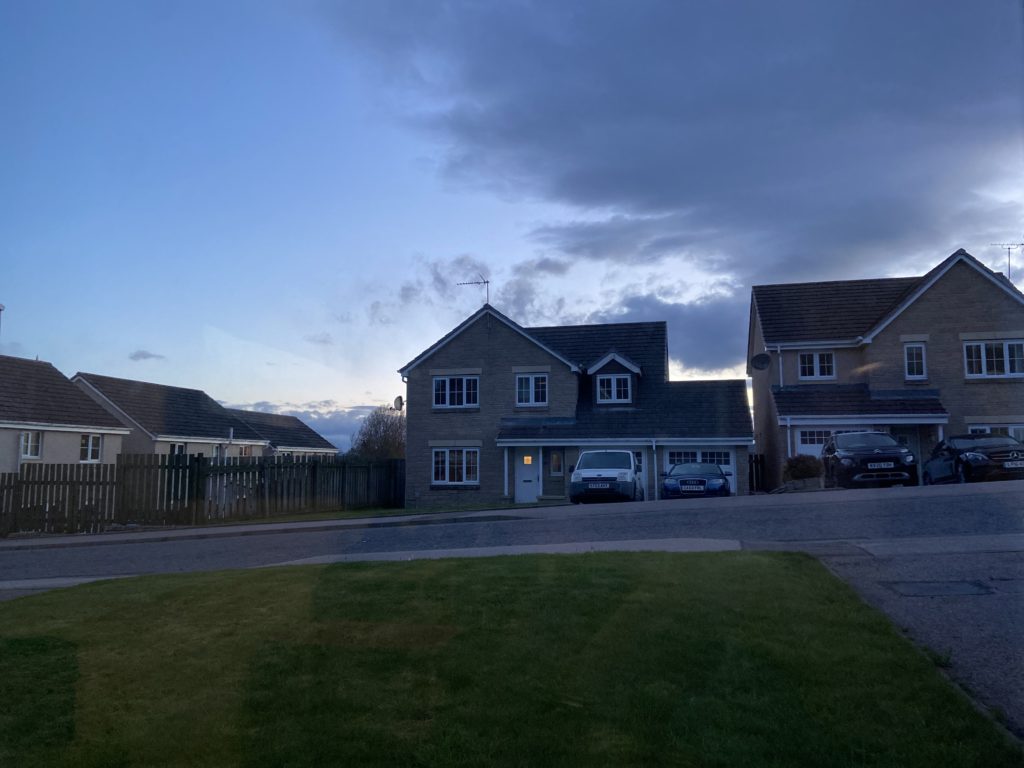 Before I get too far ahead of myself though, let us share a bit about the move and the first week.

The travel experience began a few days prior to the big move when British Airways cancelled our connection out of London. That means we had a flight going from Houston to London, but the flight going from London to Aberdeen was cancelled. It did offer us a new flight option…which left London before our flight to London actually landed! That, of course, wouldn’t work, so we tried to rebook, but multiple tech errors began. Eventually, after many days and multiple calls, we were able to get seats booked!

As the big day approached, we finalized plans, took the remainder of items to storage, packed and prepped and got the last of life situated. On the big move day, anticipation and a bit of anxiety were present as we didn’t know what to expect from the next two days of travel (and sometimes I am so glad we didn’t). 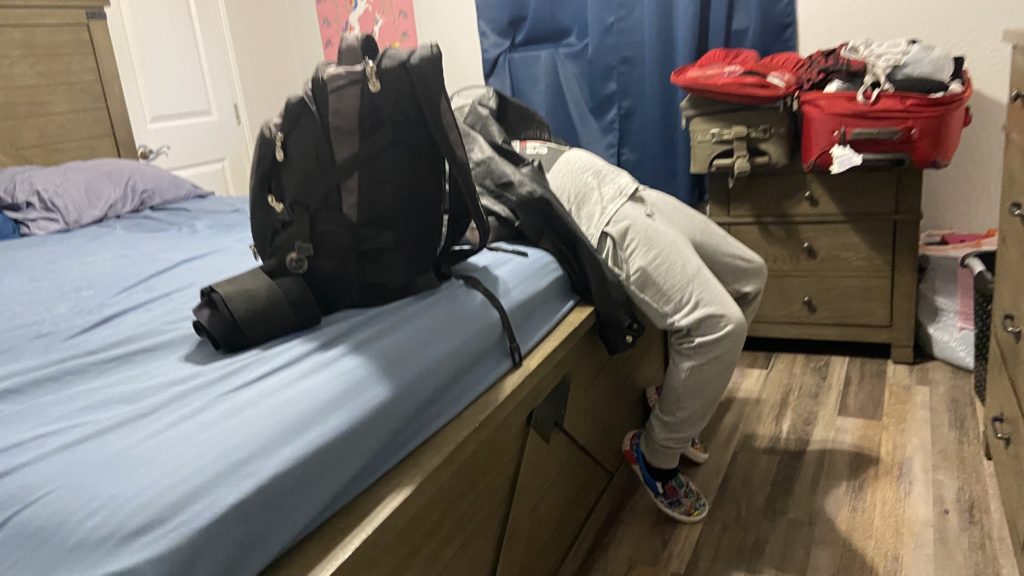 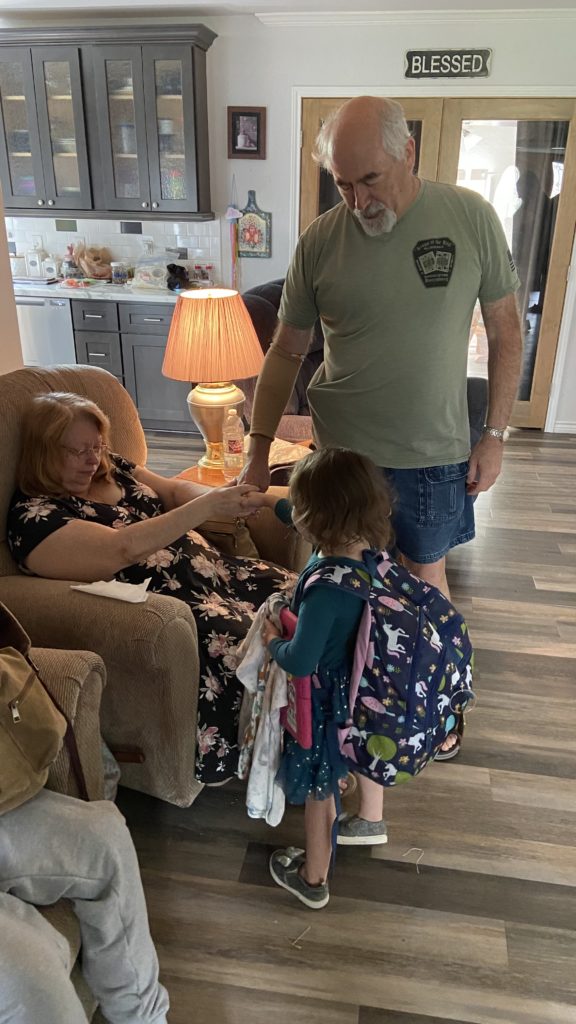 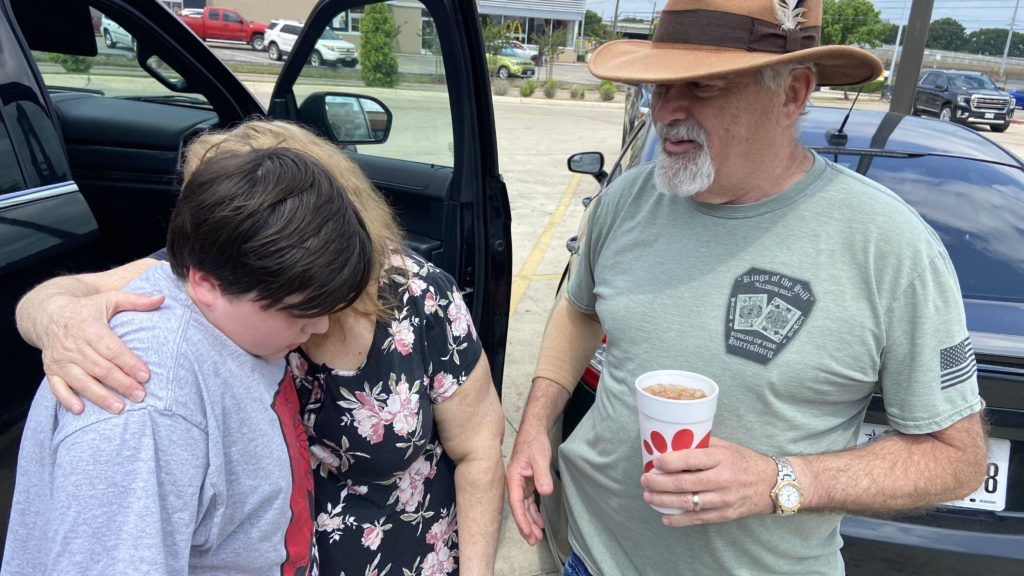 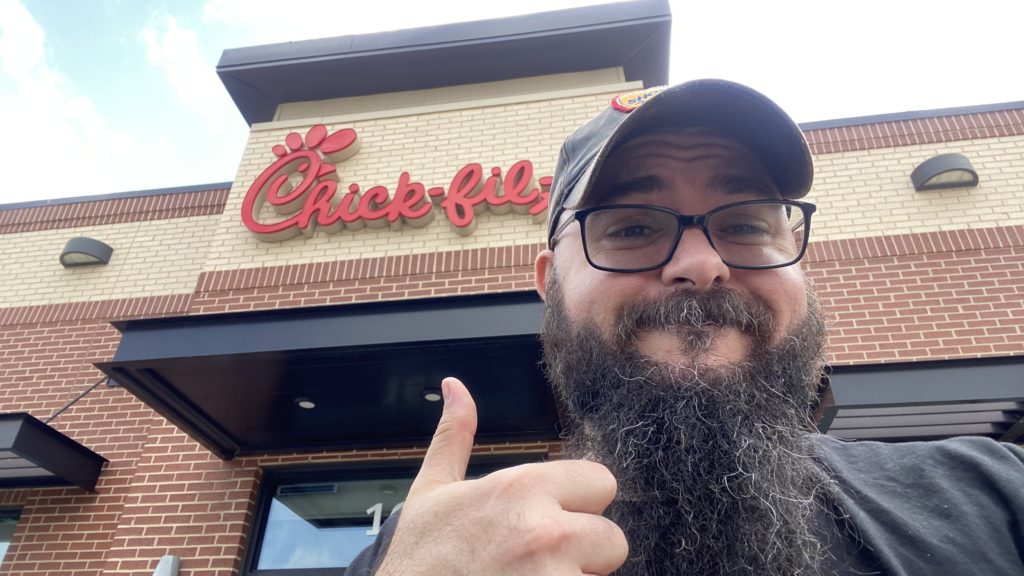 We left that morning to go visit Bucees gas station, and then to head toward Houston for a bit of lunch before the airport. In the process, we also made the handoff of our van to the buyers.

Drop-off was fairly simple.  We rented luggage carts for our mass of luggage. Those eight storage boxes, five large suitcases, six carry on cases, and six backpacks, plus a cot, stroller and a guitar were a lot to juggle. People looked on as this parade came through the airport to check in. We arrived with time and were first in line to check in, but we had to wait about 30 minutes while the younger two fussed and screamed and took turns being terribly upset. Two men in line turned to me (Chris) and verbally applauded me over the valiant efforts of Fatherhood they were seeing as I managed all the luggage and helped sort Cullen as well.

The Houston airport wasn’t too bad, as we have Global Entry which bypasses normal security, so that made it a much easier process. We sorted kids at the airport and finally loaded the plane and settled for the 9-10 hour ride. While we waited to take off,  we heard the announcement that their luggage loading machine was having trouble, so loading was going to take longer than expected (by about 40 minutes).

We looked at each other and laughed knowing it was possible, it was our boxes that broke the airport.

We arrived at London Heathrow, and despite having done this process several times, we ended up going completely the wrong way. I have to say that this was the single hardest part of our travel trip when in a moment I realized what was going on and the feeling of amount of hardship we were about to face hit me.

You see what happened is instead of going through the connections area, security agents directed us to the customs agent that had us exiting, which meant we were going to have to go through security check at London. None of our backpacks, kids, or carry-ons were ready for a security check. They had medicines, electronics, and liquids. Of the six carry ons and six backpacks and two car seats…everything except two bags had to be hand checked. I kept apologizing and explaining as ten bags were opened and dumped out. Ten bags of items were dumped into bins in the middle of the airport. Ten bags of all of our basic items were mixed up and mixed up. It took time, quite a bit of time, while over tired kids screamed. I think in that moment we were all completely, utterly, emotionally broken. We were tired, broken, and felt helpless. We didn’t give up, but we did collapse. We went to have breakfast and it took time to work through the experience and feel somewhat functional.

We found our gate afterwards and waited for our next flight, but as we were an announcement rang out that carry on baggage had to be checked due to limited space. So we took those six extra bags up to the counter to be tagged and out in the cargo hold. It was a hard process there, but turned out better for debarking from the plane in Aberdeen, because in Aberdeen you walk from a distance. The plane pulls near the terminal, but there’s no direct tunnel. You walk down stairs from the plane, across the tarmac, and then into the airport.

As we waited to take off from London, we heard an announcement that we were going to run late to take off due to the luggage loading process taking longer than normal. Again, we looked at each other and smiled knowing once again…it was probably us who broke the airport.

Tired, oh, so very tired and now fairly sore, we made it into the airports to waiting, smiling faces. An affiliate from New International came up from Edinburgh to greet us and to film us arriving for a video preparing new missionary families for the reality. I am sure we looked rough, to say the least about it. As well, a couple folks from here in Scotland arrived to help us, which was absolutely amazing. I am not sure how we would have managed otherwise! We were physically so tired, mentally so tired, and emotionally so spent, we were all ready to collapse.

As we waited for our bags at the luggage carousel, faces began to having funny looks and murmurs went around the room as one…two…three…four…five…yellow and black storage boxes came on the belt. Six…seven…eight…guitar….brown bag…silver bag…blue bag…and kept going all the way to the end when multiple luggage carts were filled to capacity and more. As we took account we noticed…no red bag! Shannon’s suitcase, which of all bags was our easy grab suitcases filled with everything we needed for the first night and day…was not there. So we went outside to a waiting van to load up the stuff and after I went back inside and found out to good news it wasn’t completely lost…it just was still in London. It took a couple days, but it finally arrived as well. 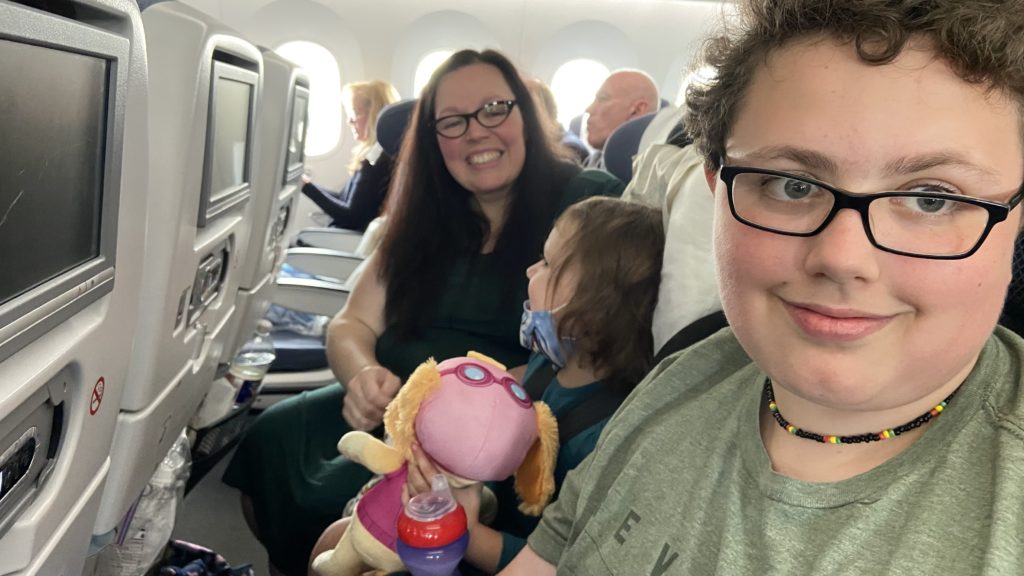 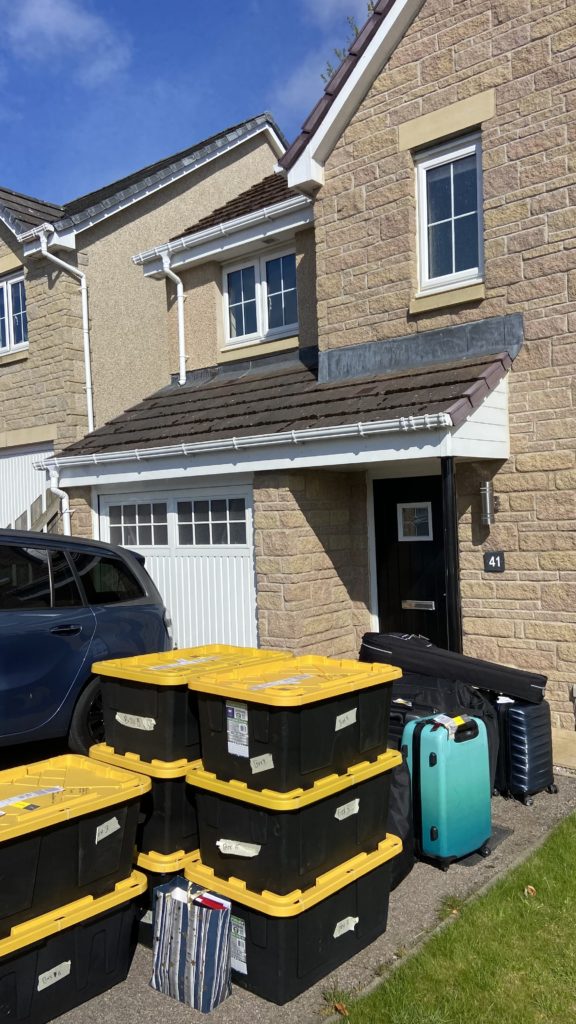 We got the boxes inside our new home, and the basics found and unloaded. Dinner was brought to our house that evening, which was a life saver! After eating, we showered, collapsed and rested… until jet lagged little ones took turns being awake, their little bodies completely confused by the time difference.

The next couple days were filled with almost complete exhaustion, as we sorted house and  basically adjusted and recouped.

So what has life been like for the first three weeks?

Personally, we have spent a lot of time trying to make our house a home, purchasing things we need, organizing and unpacking, helping the children get their rooms situated.  We are feeling mostly settled in that accord, but find every day or two we think of something that we assumed we had that we do not and have to add to the next grocery list.

We have also spent time getting things fully situated with our vehicle, as well as picking up our actual visa cards, filling out and dropping off our medical registration forms for the government medical system here (NHS), and taking some time to explore our new little home with the kids.  The older two started back home schooling last week, and currently planning to continue to home school unless the boys feel led otherwise to attend school. 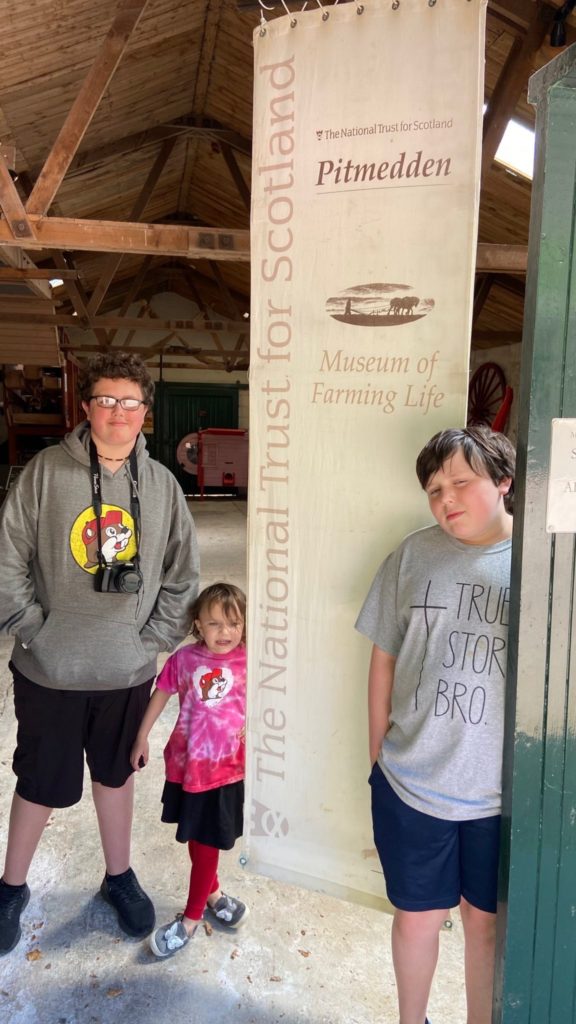 An exciting thing that has happened is that we may already be getting the seeds planted to start events with the youth.  We have found continual negativity being overall felt by adults over teenagers, but in the same token there is nothing for them to do.  Gideon made a couple of friends and wanted to bring them by so we could meet them, and we ended up with over a dozen teenagers hanging out in our garage last Friday evening.  We have plans to host this again, and praying it becomes a weekly event, with prayers and plans to do some teen events during school holidays. 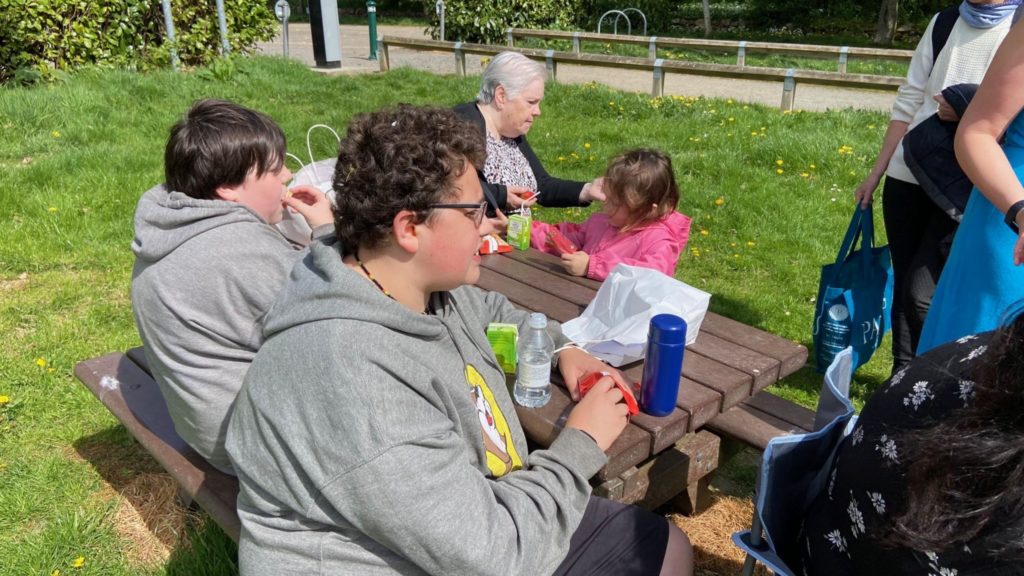 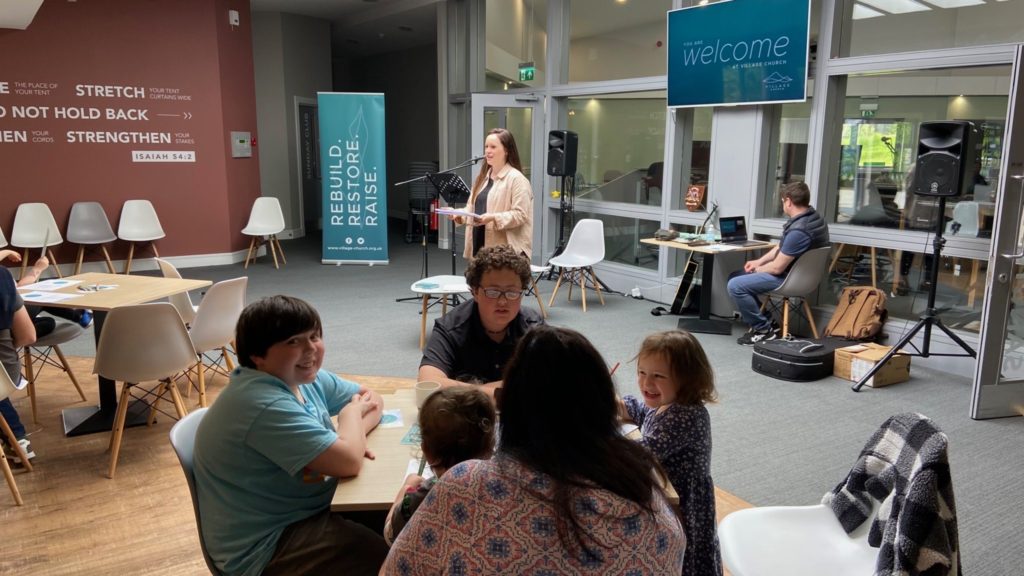 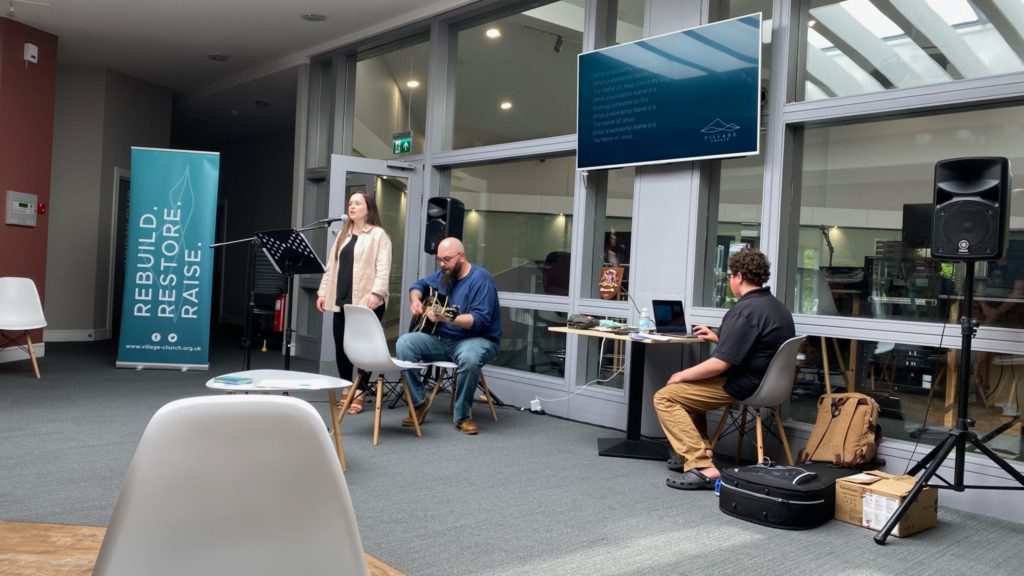 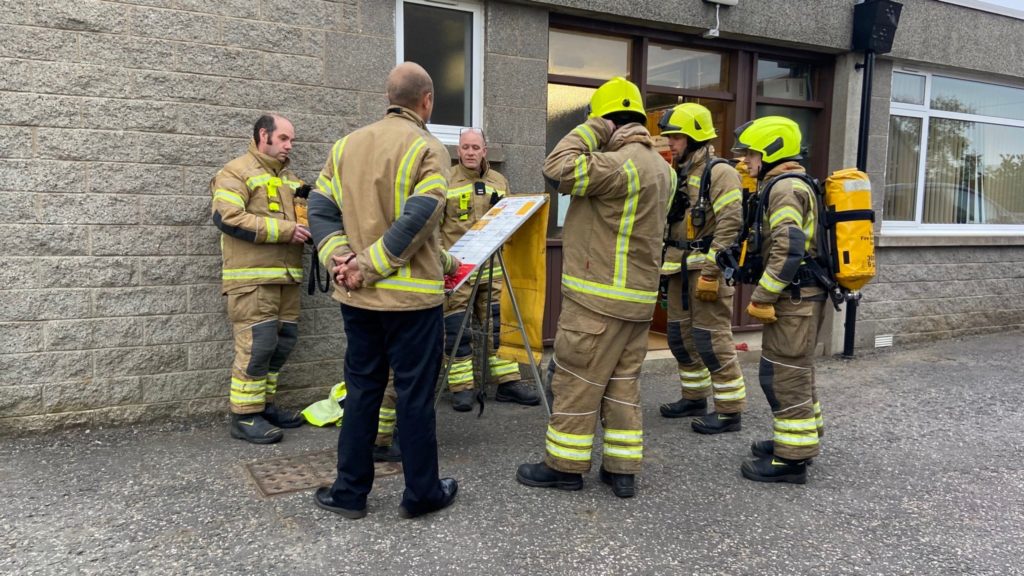 We are so grateful for each and everyone of our clan, and feel so much love and comfort knowing we are prayed over and supported for this amazing work God is doing in Scotland.  Until the next update!