A and D started care with me in the first trimester of their second pregnancy.  They had their baby with me, and you can ready about that journey here.

This pregnancy was filled with a lot of emotion.  A’s pregnancy came after an early second trimester loss a few months before.  The first few weeks were filled with nervous anticipation to get past the week that she had lost that precious baby.  Then, she lost her mom in the middle of her pregnancy.  A handled things with such strength.

The evening of September 7th, one day past her estimated due date, A called to let me know she had experienced what felt like a large amount of bleeding.  After talking through things, we both felt it was probably cervical change, and hopefully the start of labor, but reviewed what would be abnormal and when to notify me.

Contractions started during the night, coming strong and every 8-10 minutes.  By morning, A was certain baby would be coming that day, but was utterly exhausted.  I had finished up another delivery, and chatted with A on the phone.  We decided sleep would be beneficial, so she sent D for sleep medication to try and get some much needed rest.

After a nap, A decided she wanted to come see me for an exam and potential membrane sweep.  They arrived around 2pm that afternoon.  We talked through emotional hold ups, and shed a few tears over things.  Emotions can be so huge in stalling labor.  I did an exam, and found this sweet, stubborn boy to still be straight OP (aka sunny side up).  Upon exam, I found A to be 3-4cm dilated, 80% effaced, and baby at a -4 station.  My chiropractor friend was available to adjust A on their way home.  Contractions seemed to be shifting as they headed out my door, and headed to the chiro.  I reminded A that she did not labor very long with her first baby, and I anticipated a shorter labor this time.

We all arrived around 440pm, and found A working hard through contractions laying on her left side with her husband and various family members flowing in and out of her birthing space.  I talked with A about trying lift and tucks since baby was still OP to help him descend and rotate in her labor.  After a quick bathroom trip, she agreed.

Apprentice A did lift and tucks, and although they can be quite unpleasant, they were very effective for labor progression for A. The lift and tucks began at 456pm, and were complete at 525pm, with a trip to the bathroom after to empty her bladder. 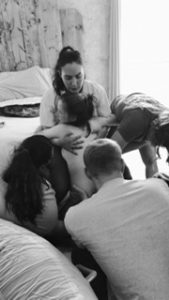 A moved into a squat at her bed side and began to push.  It was a beautiful scene (as you can see in the photo on the left) of support surrounding A.  Her sister in law helped support her from the top, her husband from the bottom, her sister providing massage and counter pressure, and I at her perineum helping with delivery. 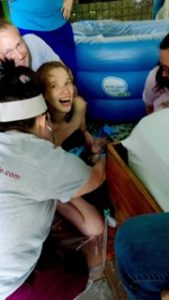 The head was on the perineum at 539pm, and he slowly stretched A.  With A’s previous delivery, this is where everything went a little rough, and I ultimately had to cut an episiotomy.  With each contraction, he came a little more.  I used oil and warm compresses to help the tender tissues stretch as he came more and more onto her perineum and into crowning.  With one final powerful push, A birthed his head and the rest quickly followed at 544pm. 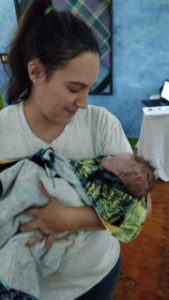 Welcome to the world, Blaise!  Born earth side on September 8th, 2019 at 544pm, weighing 8lbs and 21 inches long.  This sweet boy decided that rotating was not fun, and was born straight OP, just as he had been the last several weeks of pregnancy.  His mama is amazing.

It was a blessing to support this sweet couple through a second delivery, and a second sweet rainbow baby.  How precious he is.  He is absolutely loved by his older brother, who enjoys snuggling and cuddling him.