As we look back to February, so much has happened. At the end of January we were at 38% of our monthly support raised, so we set an ambitious goal to try to reach 50%. If you didn’t know, it can take a year and a half to two years to raise support at times, but we set a goal of nine months to attempt to reach our goal of full funding by August. We didn’t make it to 50% this month, but we did make a major leap with your amazing help and raise 6.6% of our monthly support needed! That brought us to 44.6% which means we are close to hitting the 50% mark very soon! We are on track still and hitting the mark! Great job, Clan Stellhorn! 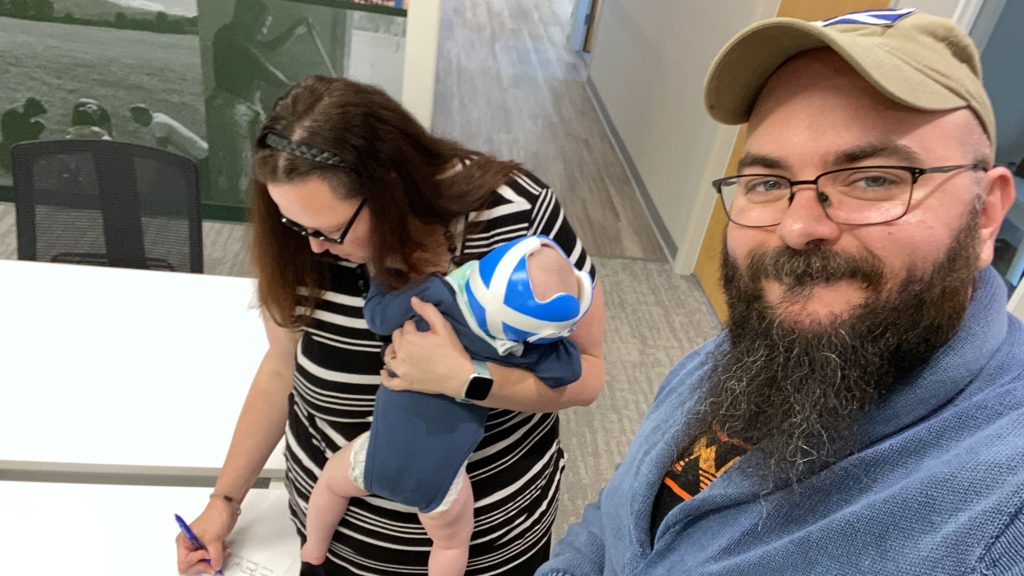 This month, we attended orientation at the New International campus in Fort Myers, FL, and upon completion, signed our official papers to become legit affiliates! (See the picture above). I will share those stories below!

Check out our Youtube page to see more videos! These are some of the daily videos we shot while at Orientation.

In mid-February, Shannon and I (and Cullen) flew to Fort Myers, Florida to begin our training. Saturday, we parked our vehicle near IAH and hopped a flight into Fort Myers.  We picked up our rental car and drove to the house where we would be spending our week. It was a two story house on the campus of NI. The NI campus is a city block, almost entirely owned by NI.  Over the years, they’ve been able to purchase the houses around the block that then may be rented by staff and missionaries. 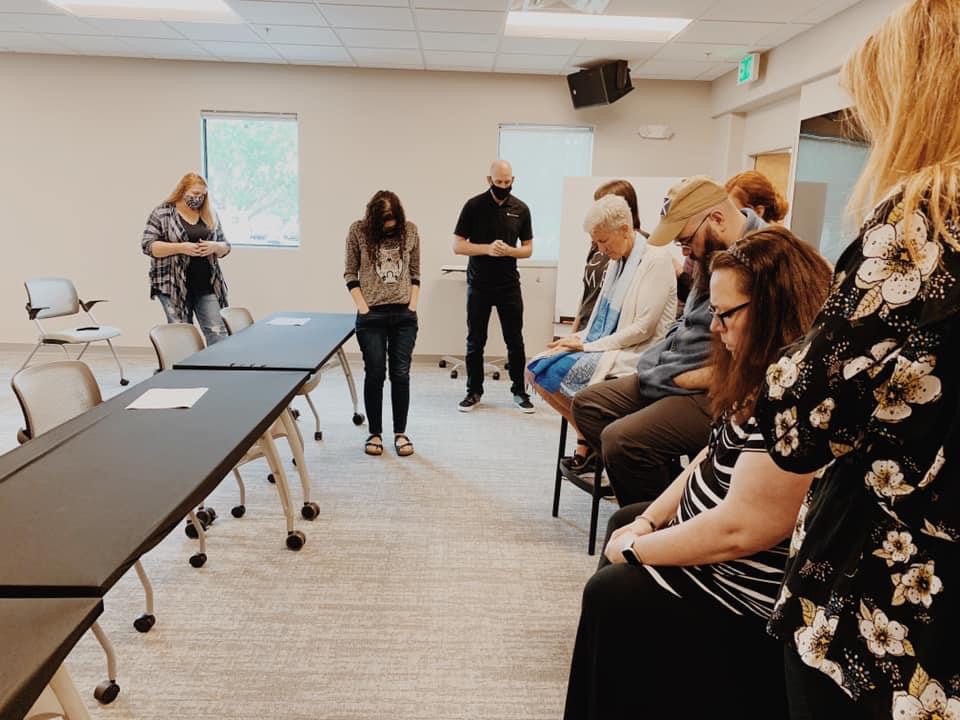 The main office building has rental space that pays for the costs of running the NI offices, which means out of the donations we raise, even the team share almost entirely goes back toward our mission work in the form of resources and media for us and His work.  It’s an amazing organization, and one that is top rated in financial accountability with both ECFA & Charity Navigator

Saturday, we settled and picked up groceries and on Sunday it all began!

Sunday afternoon, we began the initial stages of orientation, and had a great dinner with some of the team.  However, something else was taking place that week, and that was the Texas winter storm. Though it was 80’s in Florida, it was teens and twenties in Texas. As the week progressed, though orientation was going great, we felt a bit stuck because our other four children were at my  (Christopher’s) parents house with no power and very cold. They did have a fireplace and a generous neighbor who shared some generator power when my parents stopped working, but the week was hard for them none the less.

On our side, our old house was under contract, so was texting and making calls to make sure the house was situated and ready for this storm, while at the same time we had our apartment to be concerned about as well.  Our neighbor and our realtor helped keep an eye on the house, while the apartment manager kept kept an eye over there. Power was out at the apartment for several days and then the water, while the house lost power for only about 24 hours.

At orientation, we put flesh to the bones of all the material we had been studying.  We practiced our presentations, refining them, and we also put together our media handouts. During the week we were treated to some of the best food selections by the different teams at NI, and I (Christopher) also participated in a  scavenger hunt in downtown Ft. Myers with some of the team. I met lots of folks, and got a few of them involved with us. (There is video in one of the daily orientation updates)

At the end of the week, we were encouraged and it felt like a new phase was upon us as we stepped back upon the airplane to fly home.  We are thankful that orientation was in person, giving us the wonderful opportunity to connect with our NI family in the office and getting so many questions answered.   Heading home also meant big adventures awaited us as well.

You see getting back home meant several things: 1) Checking the apartment 2) Checking the house 3) Preparing for closing to sell the house 4) Helping others through the trauma of the week.

The apartment was mostly okay, we do expect a bigger water bill, as all the faucets all week were left running on a stream to keep pipes from bursting, but our only loss was our fridge and freezers. It was a hefty loss as we had medicines and Cullen’s breast milk in there as well plus a well stocked deep freeze. We did submit to insurance, but will have to wait to see.  We are blessed that next to friends, our loss was minimal.

On Saturday, I went to the house to check it out. You see, many people did there best and still had frozen pipes, so I was really holding my breath. I walked into the house that cold Saturday morning with only a wrench and a screwdriver, as all my other tools were in my van at my parent’s house, and set them and my coffee on the kitchen table. Before I began, I kneeled down at my kitchen table and prayed asking for favor, and that everything would be okay.

I stood up and began my first check and upon first glance, everything looked okay. I then proceeded outside, where I found that some of my insulation around one of my faucets was completely frozen around the faucet. I took a big breath, and used my pocket knife to cut it off….holding my breath.  Cutting through all that frozen insulation wasn’t easy as it was wet and frozen all the way through. Once I got it off, I checked and I didn’t see any cracks or leaks!

I then proceeded inside and turned on the main water valve slowly, then began my second check. I walked up and down and in and out and saw nothing again. I then went into the attic and found that both of the hot water heater had shut themselves off. With the water on I tried to re-light them with no luck whatsoever. I tried several times, waiting the five minutes in between, but nothing. I then tried to call a few folks for help, but no one picked up. So I checked the house again, brought the water pressure up to full, checked again and then stopped and prayed again. I then walked back upstairs in the attic, got down on my stomach prayed again for favor…then click, click, click, click….deep breath…*whoosh!* the first one lit right up…I then prayed and moved to the second one. The same story! It started up and we were now “cooking with gas”.

It was a big relief, a concern from all week, that the house was okay. That meant we could close on Monday…and we did!

On February 22nd, we signed and sold our house!  That, in itself, was a giant step toward our goal. The funds from the house went toward paying off medical debt we owed, which is  a gigantic relief off our shoulders.

Through the month, many of you joined us as new monthly supporters and some as one time gift supporters.   We really appreciate you, knowing that you are on our Clan standing with us. This has been a passion God placed in our hearts all these years ago he has been stoking, so seeing it come to fruition is amazing.

We are working hard as we get closer to our goal! Please pray for us and help us spread the word!

Some videos about the winter storm for historic purposes

a New Type of Goal!

To reach our monthly goal we can break it down many ways! Maybe these will help!

The Adventurer: The June Bugs

Support Clan Stellhorn Today! Your Monthly Support Helps Us Reach Our Goal! Click Here The May News As May comes to a 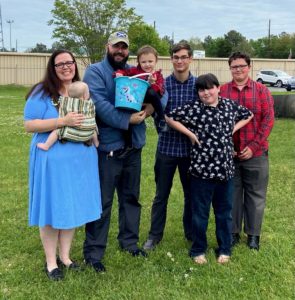 This is the May

Our Clan Stellhorn Supporters Are Amazing! Awesome! Affirming! Appreciated! Thank You! May has come, and it feels like this year is rolling

We Are Clan Stellhorn! Welcome to the April Update of “The Adventurer”!        The month of March was a full month! Cephas