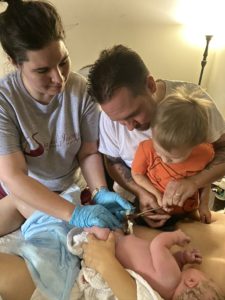 A and H started care with me in the first trimester of their third pregnancy.  I have had the privilege of being their midwife through all three pregnancies.  You can read about their previous journey’s here and here. 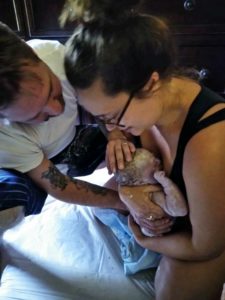 A’s pregnancy progressed along well, but as third baby’s are sometimes wild cards, this sweet girl definitely changed up her mama’s labor pattern!

A’s estimated due date came and went, and then so did 41 weeks.  We made a plan that if baby had not been born by 41.4 weeks, we would try a membrane sweep and herbs. 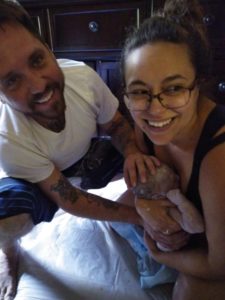 Sure enough, A made it too 41.4 weeks.  She arrived at my house around 830am.  We joked about a previous client who made it past 41 weeks, with a history of long labor, who had a very quick labor with her 41 week baby.  A said she would take it!  Neither of us knew how things would proceed and be different from her previous babies! 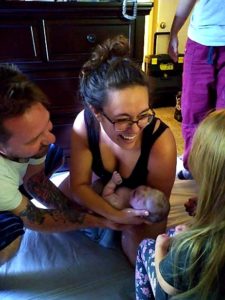 I did an exam and found A to already be 5cm dilated, 80% effaced, and baby at a -1 station.  I could stretch her cervix easily to 7cm.  It literally appeared her body simply needed a nudge to get the labor memo.  A’s previous baby was a pound bigger than her first, and I was anticipating this little one at 9lbs 8ozs, which was also bigger than her previous baby. 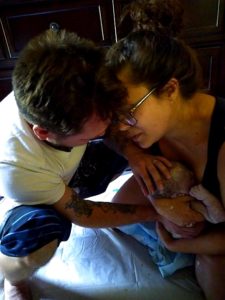 A drove home, and labor began while driving home.  I had to take my nine year old to his soccer pictures.  We did not see a reason why this would not work out since A had always had lengthier labors.

A sent me many texts while I was on the soccer field.  She said she felt like a baby feeling like her contractions were really hurting.  We talked for awhile, and I told her don’t wait too long to call us, as we are ready to support her whenever she needed. While I was driving home, A said she was ready for us.  Apprentice A and the birth assistant headed her way, while I was slightly behind waiting for the baby sitter to arrive. 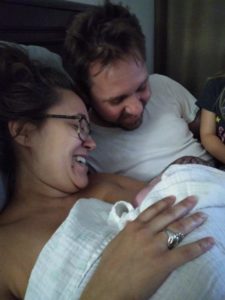 Apprentice A arrived at 1145am, and I arrived at 12pm.  A was laboring on her birth ball, moaning and grunting at the peaks.  A was so surprised things were happening so fast.  She began to push on the ball a few contractions later.

We suggested she try the birthing stool at 1219pm, as it gave her the same sort of positioning as she had on the ball.  A continued to push. 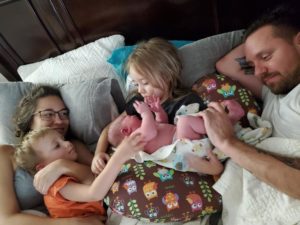 Her water broke at 1243pm, and she spontaneously moved to hands and knees.  The next minute, the head was born followed very quickly by the baby, who had her hand by her head just like big brother did.  After a fast and furious labor journey, her sweet girl was here! 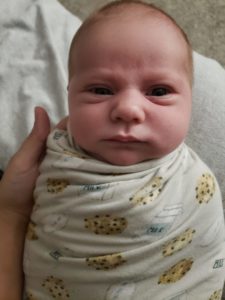 Repeats are so special, and it was special for me to support this sweet couple for a third time.  A said if there is another baby, she would most definitely go to 41+ weeks again if that means a quick labor again.  <3

Thanksgiving Greetings from the Stellhorn Clan as November progressed very quickly! Last blog we laid out our itinerary for November and all

A Bunch of October Treats

We have much to share this month from family stories to mission updates, and we hope you’ll enjoy catching up together!  As

The Summer as it Comes to an End Let me start by saying, THANK YOU to everyone who is walking the journey