All photos were taken by Immaculate Heart Photography.  You can connect with Sarah on her website or on Facebook.

L and M started care with me in the first trimester of their fourth pregnancy.  This was their third time using me as their midwife for a home birth.  You can read their other journey’s here:  John Paul and Vincent.

L had another fairly easy pregnancy.  She started having some gall bladder issues during pregnancy that she was able to fix with a better diet.  L felt like the forced diet changes made her feel like this was the healthiest pregnancy yet.

L’s other home birth babies were fairly big, so when I was estimating baby to be around 7-7.5 pounds at her 39 week appointment, I was convinced that this little one must be a girl!

L sent me a text the morning of September 12th letting me know she was fairly certain today was going to be baby day.  Her contractions were coming every 3-7 minutes, staying strong and some what regular. We stayed in touch through out the day.  Mid afternoon I asked L if she thought things might get more active if I would go ahead and come down.  L lives an hour from me, and I knew M was on the way home from work.  L agreed she would like me there, so I prepared to head her way, arriving around 430pm.

I found L laboring on her hands and knees when I arrived.  We did a set of vitals and right before 5pm did the initial cervical exam.  L’s cervix was 4cm dilated, 100% effaced and baby was at a 0 station.  I swept her membranes, then suggested M to help L with abdominal lift and tuck for 10 contractions using the rebozo. 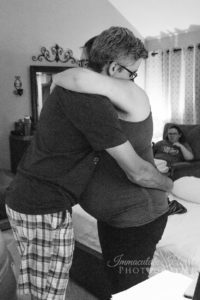 L and M walked around the house, M lifting her belly with the rebozo when a wave came.  Contractions were coming every 3 minutes, lasting 75 seconds long.

L felt the contractions intensified dramatically with the lift and tuck.  M was a constant support, providing counter pressure with each wave.

L and M walked around the house for awhile, before laboring on the birth ball.  L’s friends started filtering in one at a time. 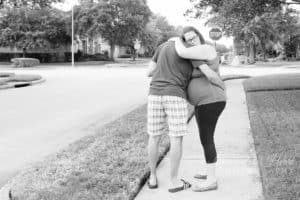 I recommended close to 7pm for L and M to try and take a walk since it was now “cooler” and more manageable to try a walk.  I thought a walk might really help get things even more active.

L and M went out for a walk.  L was back 20 minutes later saying she was feeling a lot more pressure in her tailbone. 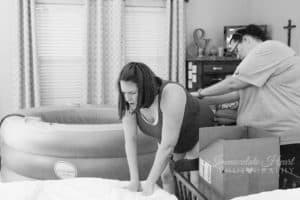 While they had been walking, I had aired up the pool.  It seemed it was time to start filling the pool with water.

L asked for an exam at 730pm.  She was now 7cm dilated, 100% effaced and baby was at a 0 station.  Things were definitely moving along quickly. 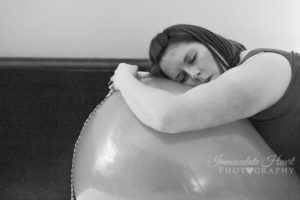 L alternated her position around frequently.  She labored at her bed side for a few waves.  She layed on her left side in her bed, M at her side providing comfort.  She moved to her knees, leaning over the birth ball, praying through her rosary as her journey moved into transition.  L was so focused and poised, pulling from her faith to continue providing her the strength.  Her waves were now 2.5-3 minutes apart, lasting 90+ seconds and were strong. 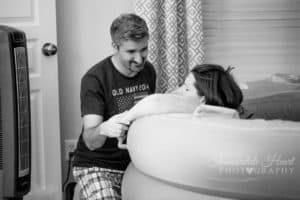 A few minutes passed 8pm, the pool was finally ready.  L was more than ready for the comfort of the pool, and got into it on her knees.  L labored beautifully, the primal, gentle moans becoming more frequent, telling us pushing was near. 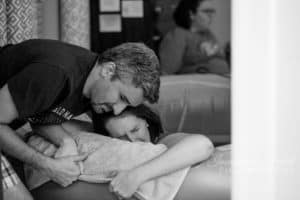 L began to spontaneously push at 837pm.  In all her previous births, L has had stubborn anterior lips.  When L realized she was bearing down, she asked me to do an exam.  L was 9.5cm dilated, 100% effaced and baby at a +1 station.  L decided she wanted to blow through a few waves until the lip was gone. 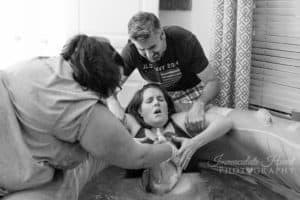 L’s water broke spontaneously at 850pm.  I was sure her lip was probably gone.  L continued to blow through contractions.  She moved into semi reclining at 858pm.  She asked me if I thought I needed to do an exam as a very powerful wave came over her.  L later told me she felt the rest of her membranes release and then the baby quickly came down the birth canal. 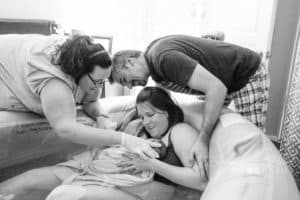 L was feeling vocal, and I stayed at her side, encouraging her to focus on me and her baby’s head that was now crowning.  Things moved very quickly.  L began to bear down at 9pm, followed by the birth of her sweet baby at 902pm.  L and M took a look and announced to everyone that their 4th blessing was a boy! 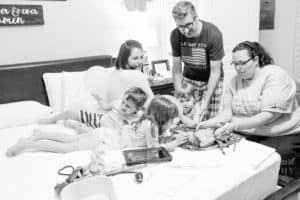 Welcome to the world Dominic, born earthside on September 12, 2016 at 902pm, weighing in at 7lbs 10ozs, 20″ long.  I am so blessed that I have gotten to work with this amazing family three times, welcoming all their boys into the world safely in the comfort of their home. 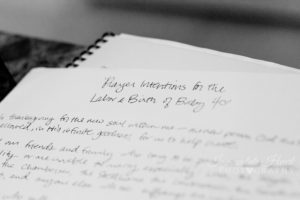 Side note I must mention:  I think one of the sweetest things about L’s labor journeys is that she always makes a list of prayer intentions that she will focus on as she labors,  That has touched me each time, and shows what a servant’s heart and such a selfless woman L is.  Love working with this awesome family.