S and S hired me in the second trimester of their sixth pregnancy.  S had been unhappy with the treatment she had received in care providers, and was desiring a VBA2C, as her last two deliveries had been via cesarean.

S’s pregnancy progressed on beautifully.  She knew she had a potential history of going a week overdue, so it was not surprising at all when S’s estimated due date came and went.

The evening of June 12th, S began to experience contractions coming every 10-15 minutes, and just aggravating enough to effect sleep.  The next morning, S had her regular prenatal appointment with me.  She was 1cm dilated, 70% effaced, and baby was at a -3 station.  I strongly encouraged S to rest, stay distracted, and consider something to help with sleep.

After a long day, S took a sleeping aid that night, and got some much deserved sleep.  She woke on June 14th, with contractions coming every 6-9 minutes, but about the same strength.  I did an exam late morning, and found D to be 3cm dilated, 80% effaced, and baby at a -2 station.  We talked about continuing the plan of rest/activity/nourishment, and encouraged S to trust the journey already set for this little guy’s journey.

Around 5pm, S and I were talking, and she was feeling very ready to meet her baby.  Apprentice A had sent with S home the day before with a homeopath that she felt may help progress S’s labor.  I encouraged S to start the homeopath for two hours, and see what happens.

The homeopath was magical for her, and almost right away contractions regulated and became more intense.  After a couple hours of more intense contractions, S asked if I would come.  I knew it was probably early still in the journey, but wanted S to be supported.

I arrived at 815pm, and found S semi reclining in the bed.  She was focusing and breathing through contractions, which were coming every 3-4 minutes, lasting a minute long.

S labored on the birth ball while sipping on fluids after the walk.  She was feeling more pressure with the contractions post walk.

S requested an exam at 10:14pm after having a small amount of bloody show.  she was 5cm dilated, 100% effaced, and baby was at a -2 station.  I could feel a very bulgy bag of water during the exam.

As midnight appeared, S wanted to try to rest.  We helped get her in the bed, and positioned her on her side with the peanut ball to give baby plenty of room to move on down.  S attempted to rest, but stated her contractions hurt much more in this position.  Contractions were coming every 3-3.5 minute, lasting 75 seconds. She decided to get out of the bed at 12:45am, and began doing captain morgan’s with hip circles to help with progression.

S requested and exam and for her water to be broken at 130am.  We reviewed risks and benefits of breaking water, and I did an exam and was able to rupture her bag during a contraction.  Her fluid was nice and clear, and she was now 6cm dilated, and baby at a -1 station.

I recommended S try open knee chest for 40 minutes to help continue to shift contractions and help baby move down.  I applied counter pressure for a few contractions for comfort, which S stated helped with the discomfort the contractions brought.

S got into the birth pool, laboring on her knees, at 230am.  Contractions were coming every 2.5 minutes, lasting 60 seconds, and strong in intensity.  S was feeling more rectal pressure with contractions.  We encouraged her to breath through her labor waves, and allow her baby to move on down.

S got into the birth pool a little after 3am, and they labored together in the pool through out the hour.  We dosed S with some herbs to help with calming when things felt tough, and helped take the edge off.

S requested an exam around 4am, but was tense and hard to do an exam in the pool.  We talked about options, and S decided she would like to get out for a cervical check.  I did an exam at 4:20am, and found S to be 9cm dilated, and baby at a +1 station.  We all cheered S on with how close she was to the finish line.

S decided to lay on her side in the bed for a few contractions, and S used some essential oils on her back to help with back pain. We continued alternating a couple herbal tinctures to help with calming, while S provided counter pressure on S’s back.

After S was becoming discouraged by no progression, I recommended she get in open knee chest again at 5am, since baby was so close to being earth side.  S was such a trooper, and so ready to meet her sweet baby.  She got in open knee chest, and continued to breath through contractions while apprentice A and assistant H alternated providing counter pressure with contractions.

At 530am,  S requested I hold back the cervical lip that now remained to help her meet her baby.  It worked well, and S moved to semi reclining a few moments later.  I suggested trying tug of war with the rebozo with contractions, and begun this at 535am, with assistant H helping with the tugging.

Tug of war proved to be very effective for pushing, and the urge became powerful to bring her baby earth side.  We could see the head visible on the perineum at 541am.  With the next contraction, the baby was crowning, and then we hung there for a couple minutes.  The next contraction was very powerful, and S brought her sweet boy earth side and into her waiting arms at 545am.  He was here! 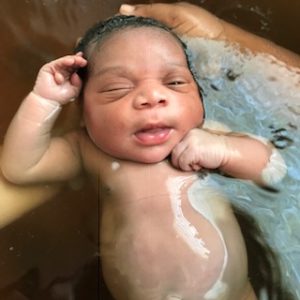 Welcome to the world, Channing!  Born earthside on June 15th, 2019 at 5:45am, weighing in at a whopping 9lbs 2ozs, 21″ long.  S’s vaginal birth babies had previously been in the upper 6 pounds, making this littler guy over 2 pounds bigger than her previously biggest vaginal birthed baby!

I am so proud of this sweet mama for all she did and all she over came to birth her baby her way, on her terms, in the comfort of her home.  She is one strong mama!